When I started as a cop many years ago, we were issued the 3rd Generation Smith and Wesson 4046 semi-auto pistol. The pistol was an all steel beast that handled the .40 S&W round well and could easily double as a boat anchor. One of the only drawbacks to the handgun was that the gun could become very slick during summer months when you were sweating and trying to shoot the gun well. Back then the idea of adding traction tape like skateboard tape, Talon Grips, etc didn’t exist and the closest thing you were going to get was a Houge grip sleeve.  Houge also offered some scales for the pistols but the increased grip texture came at the price of increased thickness of the pistol which no one wanted. So how did he fix the issue? Pieces of bicycle inner tube.

Bicycle inner tube was cut into smaller pieces and then pulled over the grip. There was enough tension from the smaller size of the tube that you didn’t have to worry about it shifting. Also, the tube was a non-permanent, easy to remove modification to the gun. And finally; it was cheap.

If you decide to try the inner tube route, there are several ways to try it out. You can use a single large piece of tube or you can use several smaller sections. I’m more of a fan of the strip method, since it allows me to use whatever texturing is already present on the gun. I recommend trying each one and finding the one that works well for you. 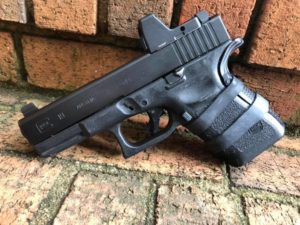 About the only drawback to using the inner tube is when you place the inner tube and it interferes with the magazine release. Obviously, you need to make sure the modification doesn’t have a negative impact on your gun’s functionality.