Home » Training Blog » Defensive Concepts » Is That a Tourniquet in Your Pocket or Are You Just Happy to See my Trauma?

Over the past few years we have seen an ever-increasing push for people to obtain medical training. Across the social media spectrum, and on numerous internet forums, we have seen an often-cited refrain of “but what about medical?” when people are showing off their favorite blaster and zombie apocalypse deployment kit. As a result, a unique phenomenon as occurred; the rise of the tourniquet. Nowadays you can’t swing a dead cat without hitting someone talking about tourniquets or showing off their shiny new TQ. While I encourage everyone to be trained and prepared please put the TQ down and step back for a second.

Here comes the part that will piss people off…….. THE TOURNIQUET ISN’T THE HOLY GRAIL OF TRAUMA CARE

Now that heads have exploded and asses have become sore, let’s look at what I mean by that.

The 16 years we have been at war have done an amazing job at advancing casualty care and a record number of lives have been saved, on the battlefield and at home, thanks to these advances. One of the greatest advancements has been a better understanding of tourniquets and how to use them. When I was in the Army, we were taught that the application of a tourniquet was a last-ditch resort and was to only be done after you had done everything else possible to stop major bleeding. It was a step that, while life-saving, would probably cost the person his limb due to the cutoff of blood flow. We now see that was a load of BS. The swift application of a tourniquet saves lives and doesn’t cost people their limbs. In short, tourniquets are good but they aren’t the only solution to trauma needs.

Tourniquets see a great deal of use in the military due to injuries caused by explosives and gunshot wounds to limbs. We don’t see as many gunshot wounds to the torso with military members thanks to the armor that virtually everyone wears today. Now keep in mind that this doesn’t fully translate to the trauma injuries we see in the United States. Take a look at this slide for some stats on the injuries we see here (this is in context of mass casualty/active shooter situations): 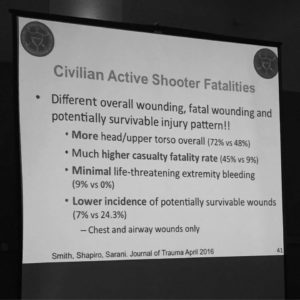 As we look over that PowerPoint slide, we see that extremity hits are low but they do happen. As a result, we need to have tourniquets on hand. But a tourniquet doesn’t address the trauma that we are likely to see such as head and torso wounds. Preparing ourselves for these types of trauma is where a great deal of people are setting themselves up for failure. Carrying a trauma/first aid kit, getting training, and know how to improvise treatment items are all things that can help us out.

While throwing a tourniquet in your pocket is cool, you need to have additional medical supplies on you. Gauze (doesn’t have to be “combat gauze”), pressure dressings, and barrier devices (for mouth to mouth) are all things that will better prepare you to handle trauma to the body/head. How much of this stuff should you carry? That’s really up to you and the situations you see yourself being involved in. I keep 3 kits in my vehicle. A small Spiritus Systems SACK rides on the bottom of my plate carrier and has the following:
• Muslin bandage
• Cinch Tight 8”x10” dressing
• 2 packs of Gauze
• Trauma Shears
• Small flashlight
• CAT tourniquet
• Gloves

In my Emdom waist pack I have:

In my Tactical Tailor First Responder bag I keep a ton of the above listed items with multiple SOFTT and TK4 tourniquets. I also have some SAMS splints and a few needles for various tasks. 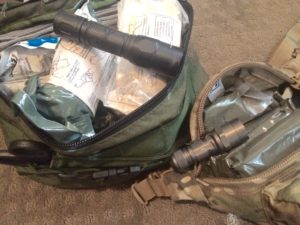 Each of these kits build upon each other and are grabbed based on the situation I’m dealing with at the time. Obviously in a mass casualty event like seen in Las Vegas, I’m going to burn through the contents in all three bags which brings me to my next point.

Know how to improvise. In a true mass casualty event, you are likely to burn through all the medical items you bring to the scene. If this happens you can’t call “foul” and step off the field. You have to know how to use items like clothing to stuff wounds, plastic wrappers to seal sucking chest wounds, and ways to improvise tourniquets. There is a story floating around about a guy in Las Vegas that was using his clothing to cover the faces of the dead that he encountered. A better use for his clothing would have been treating the bleeding issues he was encountering. No offense, but the dead don’t need any help at that point……the 500+ injured do though. 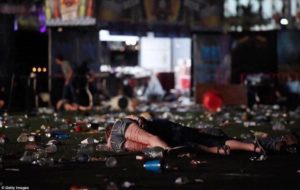 Finally, get training. While it is great if you can get to one of the combat trauma or TCCC classes that are being offered, don’t think that those classes are your only option. Go to places such as the Red Cross and take some First Aid AND CPR classes. Couple these “basic” classes with a bit of reading and start to expand your base of knowledge. You’ll be amazed at how many problems direct pressure, pressure points, and elevation can solve. One of the best thing about many of these classes is that they are inexpensive. You really don’t have an excuse not to get some kind of training at this point.

In closing, get some training and start carrying more than your Instagram cool guy tourniquet.