Or so goes one of the most common urban myths surrounding the shotgun and its use in personal protection. According to some, each time the trigger of the shotgun is depressed, an omnipotent ball of death (I really should trademark that) rolls out of the front of the gun and consumes everything in front of it. If you’ve spent any amount of time on a shotgun in meaningful training you know just how wrong such a line of thinking is.

When it comes to aiming the shotgun, a key thing the shooter needs to know is how his shotgun patterns with the load that is currently in the gun. The pattern is simply the spread of the shot at a given distance. With this being a critical piece of knowledge, you’d be surprised at how many people are completely ignorant of it. When we teach a shotgun class, we have students pattern their guns at 5, 15, and 25 yards with the payload they normally use in the shotgun. This gives them a pretty good idea of what their gun can do with their chosen ammo. We also make sure to point out that these patterns can change with different ammo, barrel treatments, or chokes.  Let’s take a look at two targets from a recent shotgun class: 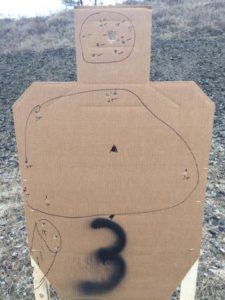 This target was shot with a Mossberg 590 and 12ga “military” 00 Buckshot. Take a look at those patterns…..they are horrible. At 25 yards the pattern is barely on the target and there are large areas (where all the vital organs would be located) that are unscathed. This gun would greatly benefit from a change in ammunition, at the very least. 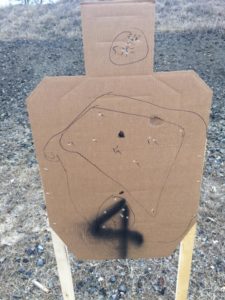 This was shot from a modified Remington 870 and the shot load was Federal LE 12ga 8 pellet 00 Buck.  This gun displays the type of pattern we generally want to see a shotgun, that’s used for personal defense, to throw. The 25 yard group remains pretty tight which would insure vital organs would be taking some hits if the shooter did his part. For those that are curious about the largest pattern; that was a bird shot load fired at 15 yards.

So, if yo uhave yet to do so; break those shotguns out of the closet and head to the range with your personal protection ammo. Once you’re there, shoot the gun at various distances (and not just the typical distances encountered inside a home) and see what your gun is capable of. If you find it lacking, and you stand a good chance, take immediate steps to correct it. After all, you do in fact have to aim a shotgun.