We are currently living in a grand time for the modification of firearms. While a lot of things being produced are built mainly as a means of transferring money from your wallet to someone else; there are a number of items being produced that are truly helpful for us. Today we are going to look at two things that are seeing a resurgence on handguns, ports and compensators.

Ports and compensators certainly aren’t new to the world of handgun shooting and have been staples of the competitive world for decades. In the self-protection/tactical space the pair haven’t been very popular in recent years though that is currently changing. For those that are unaware of what ports and comps do, it is quite simple. Both items help mitigate recoil/muzzle rise but do so through different means. Let’s take a look at each; what they have to offer and potential drawbacks to them.

Ports or porting is the first item in the chute.  Porting simply refers to cutting holes in the barrel (and the slide of the pistol for certain handguns such as the “C” variant Glocks) in order to project gas upwards in order to “push” the muzzle down as the action cycles during the firing process. Porting is often the cheaper method of the pair and has less impact on reliability since you don’t have something hanging off the end of the barrel as seen with the compensator. It is also much easier to find a holster that works with a ported gun since you aren’t dealing with anything extra on the front of the gun or, at most, an extra inch or two of barrel. 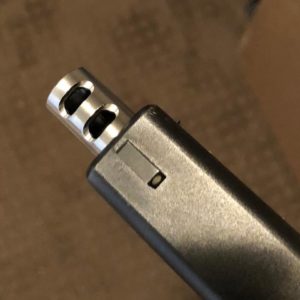 Are there any negatives to porting? Yes; yes there are my good man. Two of the main negatives we see with porting is a reduction in projectile velocity and debris exiting the ports. Let’s look at velocity loss first.  If we are dealing with ports that are cut into the barrel that is of standard length, we are going to see a drop in projectile velocity to the very nature of how porting works. Since the ports are allowing gases to vent upward in order to counter muzzle climb, this also means that the gases that push the projectile down the bore are also venting upward which robs the projectile of its means of being pushed down the barrel.  How big of a velocity drop are we going to see? It depends on the number of ports, where they are located, etc. A way to get around this velocity loss is by using an extended barrel that has ports cut into the extended portion. This allows us to get full use of the normal barrel length for powder burn purposes then we get the benefits of the ports.

A second drawback, and easily the more important one to pay attention to, is that of debris exiting the ports. The porting is literally cuts made into the barrel. As a result of these cuts being made, there are sharp corners now present inside the bore. As the projectile travels down the bore it is spinning aka ballistics 101. As the spinning projectile hits these cuts, there are pieces of jacket and/or lead (if it’s a non-jacketed round) that are carved off the projectile and then ejected out of the ports. This debris can cause injury by imbedding itself in the skin or hitting a shooter in the eyes. This debris isn’t much of an issue for us when the gun is held at full extension, but it becomes a major hazard as the arms start to collapse and the gun moves back towards the body (as seen in shooting from retention positions).

Two lesser concerns seen with porting are carbon build up on the front sight and the gas venting during low light. Depending on how the ports are placed, you can see excess carbon build up on the front in a more rapid manner. If this is of concern to you (ie you are shooting in low light and using tritium sights), you’ll need to remember to wipe the front sight off from time to time.  And while we are talking about low light; the flash coming from the ports has yet to be an issue to anyone coming through any of our low light courses.

Now let’s look at compensators (aka comps). Comps are devices that are placed in front of barrel (typically screwed on to the barrel) that vent the gases leaving the muzzle in a direction (typically upward) that helps to counter muzzle climb. Some comps also vent gases to the side, it simply depends on the design of the comp. Comps typically offer us the greater amount of counter to muzzle climb due to a more effective design and adding weight to the gun. These positives do bring some negatives with them.

The negatives of the comp generally revolving around increasing the size of the gun and issues with gun reliability. Increasing the size of the gun is due to the attachment of the comp to the end of the barrel. On average most comps targeted at the self defense market are going to average about 1” in length. While 1” doesn’t seem like a lot (that’s what she said), it bumps a Glock 19 sized pistol up to that of a Glock 34. It can push a Glock 17 sized pistol close to that of a 17L. These size increases can make holster selection a bit problematic.

There are currently two comps on the market that look to counter this size increase. Griffin Armament offers their Micro Carry Comp which uses a tubular designed comp that threads onto a barrel much like a thread protector. While not cutting down on length, the alternate design allows a greater number of holsters to be used since you are, in effect, finding a holster that will work with just an extended barrel as opposed to a comp that’s the same dimensions of the pistol’s slide.  Parker Mountain Machine, the other solution, offers shooters of the Sig P320 to use a sub-compact slide, threaded barrel with comp, on a full-size frame to have a highly effective comp sitting on the equivalent of a full size P320. It is an awesome idea for guys using, or thinking about using, the 320.

The second issue seen with comps is reduced reliability of the pistol once the comp has been added. As with anything else, anytime we start to take a pistol from its original state we start to experience trade-offs. To compensate for hits in reliability guys will have to play with recoil spring weight or be forced into using higher velocity ammunition. I have been lucky in that each comp I have used has worked well with a standard recoil spring (meaning the one it came with from the factory) and factory loaded ammunition. I have seen some failures to cycle when using lower powered ammunition loaded for competition, but even then, the issues where intermittent.

So, which is better? Ultimately you have to look at your needs and make that decision. If given the chance, I’ll go with a compensator whenever possible though I do keep a few ported barrels on hand for those occasions where that’s the route I need to go.